“While this data shows an early encouraging trend with increased opportunity for women to move into executive management roles in comparison to pre-pandemic years, there is still a long way to go—too long—until we achieve real gender equality,” says Vinay Kapoor, Chief Diversity, Equity, and Inclusion Officer at FactSet. “Companies everywhere need to take proactive, intentional steps to attract and retain female and gender non-conforming talent. We also need to remain mindful of the continued and disproportionate impact that the pandemic has on women at work.”

While the increased hiring of women to fill open CEO roles is noteworthy, we’re seeing a more noticeable shift in female representation among corporate board members. This is happening as external pressure builds for companies to promote gender equality and diversity within the workplace.

In August 2021, the U.S. Securities and Exchange Commission (SEC) approved a proposal by Nasdaq to adopt new listing rules related to board diversity and disclosure. The rule requires most Nasdaq-listed boards, other than exempt entities and companies with boards consisting of five or fewer members, to have at least one woman in addition to at least one member of any gender from underrepresented groups defined by race, ethnicity, or sexual orientation. In lieu of compliance, Nasdaq-listed companies can explain why they cannot or will not meet these requirements in public disclosure. 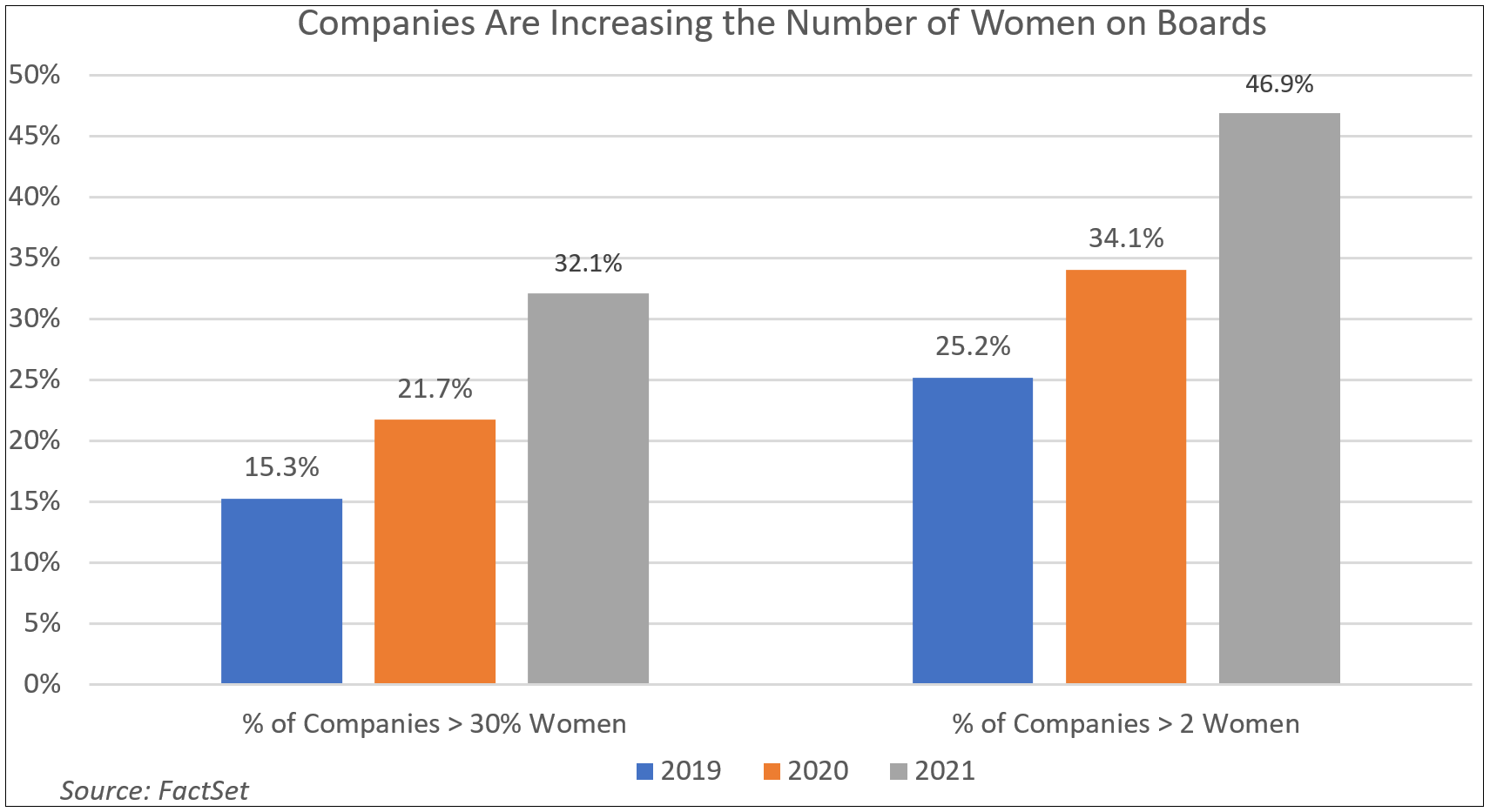 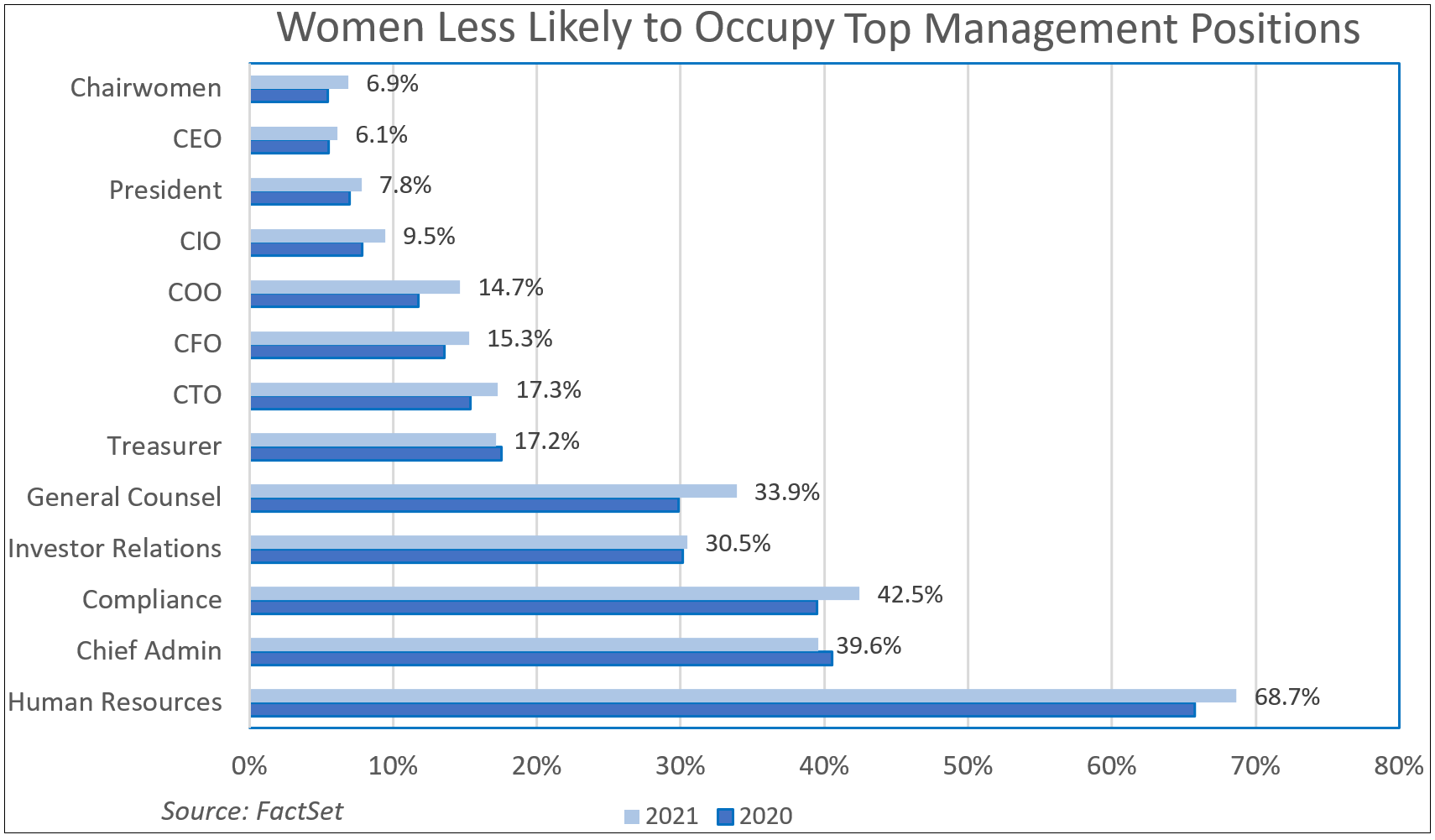 As we saw in 2020, utilities and consumer discretionary continue to be the top two sectors with women CEOs, with 12.9% and 8.7% representation, respectively. The consumer services and consumer staples sectors tied for third place in 2021, both with 8.1% representation. While there were increases in women CEOs across most sectors, there were declines in the energy and information technology sectors, and stagnation in health care. 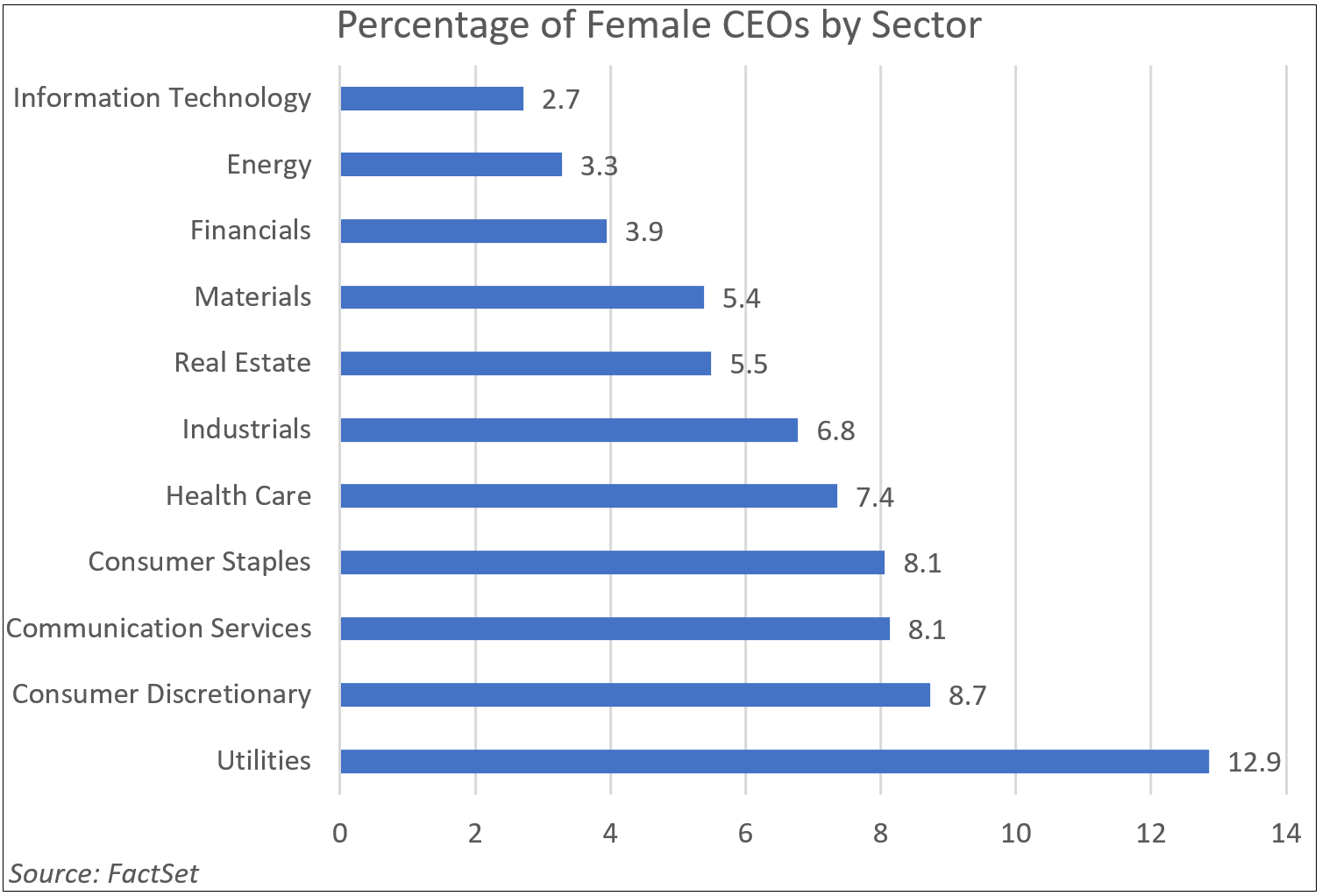 Through a global lens, female representation in the U.S. continues to move forward. Women held 25.15% of board positions in 2021, passing several countries over the last year, including Switzerland, Germany, Spain, Italy, and Canada. While the United States is moving in the right direction with a 2.05 percentage point increase year over year, it still lags 17.70 percentage points behind this year’s top country for female board representation, the Netherlands. 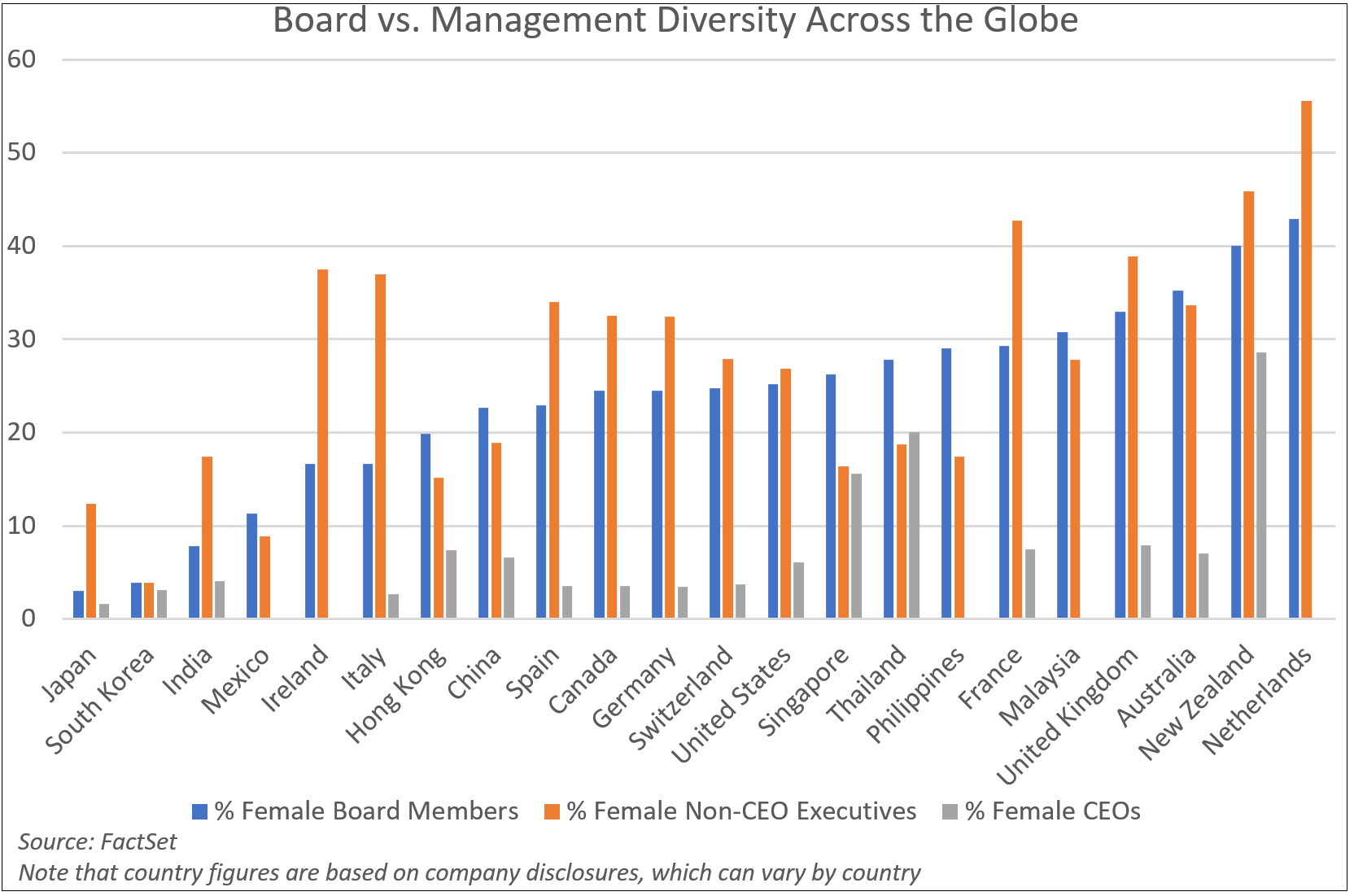 In the U.S., women made up only 6.1% of CEOs in 2021, far behind the leading country, New Zealand, with 28.6%. The U.S. saw improvements in the percentage of female non-CEO executives, increasing 4.4 percentage points since 2020. However, the U.S. still lags Canada, as well as several countries in Europe (Netherlands, France, United Kingdom, Ireland, Italy, Spain, Germany, Switzerland) and the Asia-Pacific region (New Zealand, Australia, Malaysia).

U.S. Companies Have Room for Improvement on Gender Equality SDG

Looking at the Russell 3000 through an environmental, social, and governance (ESG) lens also surfaces some interesting trends. FactSet’s Truvalue Labs data calculates scores aligned with the United Nations’ Sustainable Development Goals (SDGs) by using artificial intelligence to analyze articles from over 100,000 vetted sources. Truvalue calculates a score for Overall Impact, as well as scores for each of the 16 SDGs, which include Gender Equality. Using a scale of 0 to 100, Truvalue generates a score where 50 represents a neutral assessment; the closer the score is to 100 the more positive the sentiment, and the closer the score is to zero, the more negative the sentiment.

In 2021, the sector with the best relative performance was Utilities, with a Gender Equality Insight Score of 46.69; as noted above, this was the sector that had the highest female representation at the CEO level. The Utilities sector was followed by Non-Energy Materials and Healthcare, respectively. Interestingly, all sectors had scores below the neutral threshold of 50, reflecting negative sentiment around alignment with the goal of achieving gender equality. However, the Gender Equality score of the entire Russell 3000 universe has increased year over year since 2018, indicating companies are showing improvement in reaching this goal. 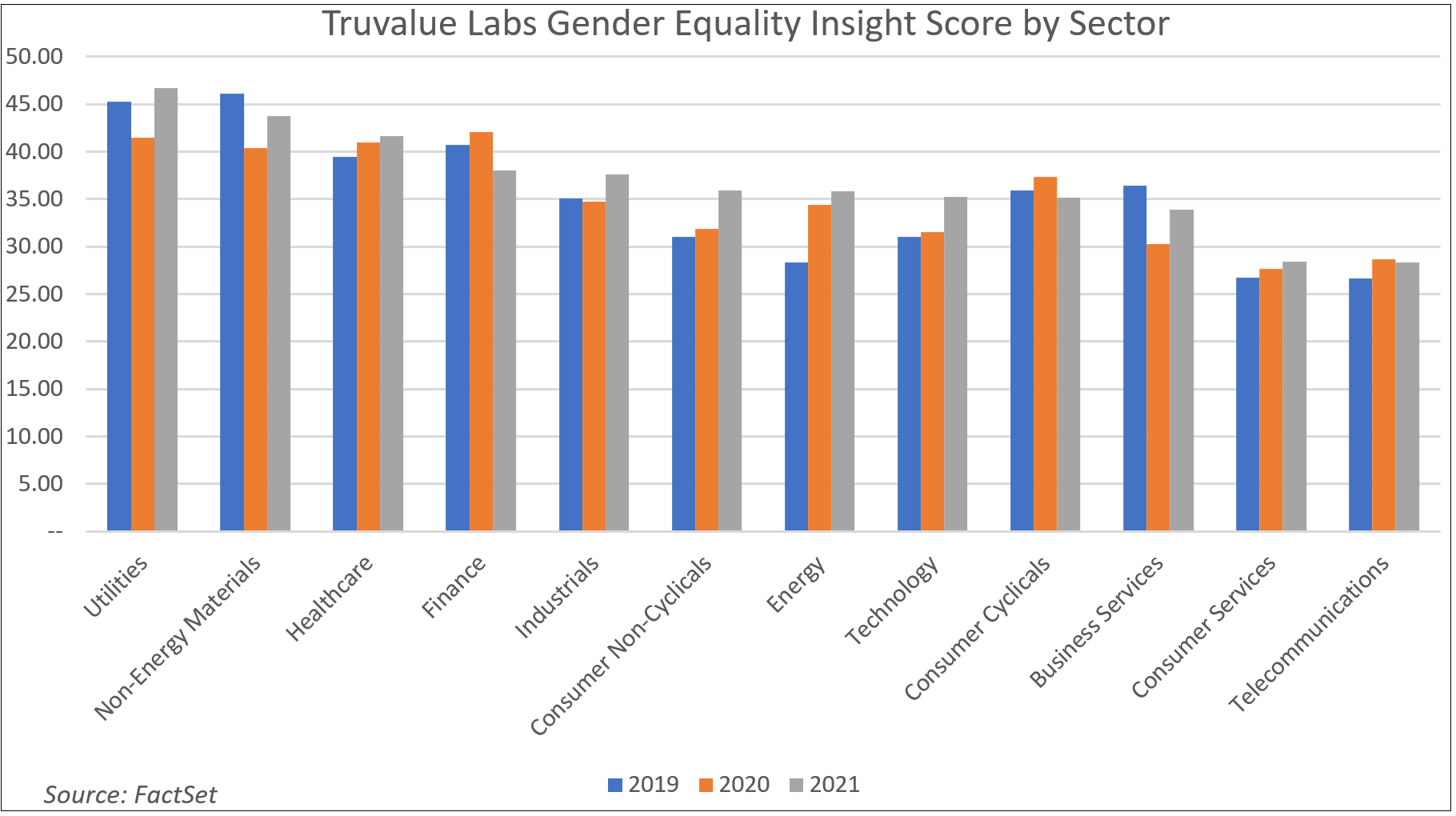 However, we should note that only 34% of the companies in the Russell 3000 had article information linked to Gender Equality according to the data collected by Truvalue Labs. Mandates such as the one by Nasdaq that aim to increase gender diversity at the board level will help shine a spotlight on equality and spark more conversation. Over half of the current Russell 3000 constituents are traded on the Nasdaq, which suggests that the number of companies with conversations around Gender Equality will continue to grow.

How Does Racial and Ethnic Diversity Come into Play?

In addition to examining the progress of senior-level women in the workplace overall, the LeanIn/McKinsey 2021 Women in the Workplace report also delved into the experiences of women of color. The survey found that “1 in 8 women of color is a ‘double Only’—often the only woman and the only person of their race in the room—and they are far more likely than other women to experience microaggressions.”

Unfortunately, we were unable to perform a statistical analysis of executive and board diversity beyond gender due to a lack of reporting by the companies themselves. U.S. companies are currently required to maintain this data and report it to the Equal Employment Opportunity Commission (EEOC), but analysis by JUST Capital found that 70% of companies in the Russell 1000 do not have demographic data disclosure. While U.S. firms are increasingly opting to publicly disclose more detailed demographic breakdowns of their employees and leaders, there are no established global standards.

“Due to a lack of reporting by companies, it is not yet possible to perform deeper statistical analysis (e.g., race and ethnicity),” says Kapoor. “We need to acknowledge that the experience of women is not homogenous, and we need to ensure that the gains in representation are for all women, for example, women of color who currently remain underrepresented at all levels of employment.”

Our data suggests that in 2021, women benefited from the increased turnover of the pandemic and the Great Resignation and were able to secure positions in executive leadership positions and on corporate boards in greater numbers. While regulations and rules such as the one proposed by Nasdaq are helping to move the needle, pressure from investors and financial markets are proving more effective in driving corporate diversity initiatives. As investors increasingly focus on ESG standards, companies will be forced to respond with progressive action.

Reporting on gender diversity will continue to bring these topics to the forefront of the conversations that will help change the perception of women in the workplace. A study published in the Proceedings of the National Academy of Sciences, found that promoting women into senior leadership positions is associated with a reduction in gender stereotypes in organizational language. FactSet is proud to be a part of this change by disclosing our global gender breakdowns in our 2020 Corporate Responsibility Report.

Jonathan Carkeek, Kelly Quinlan, and Sara B. Potter, CFA, contributed to this article.

Methodology Note: Constituents of the Russell 3000 were held constant for each year this data was gathered; for example, constituents for the year 2017 were pulled as of December 31, 2017. These numbers may underrepresent the true CEO turnover based on index constituent changes which may have happened during the respective year.